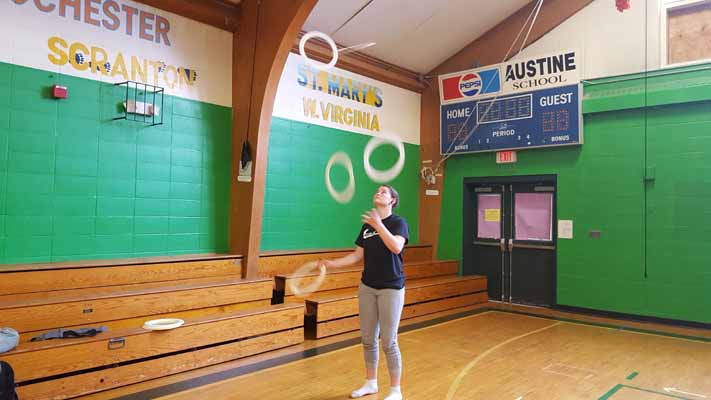 I was invited by Doug Stewart, founder and executive director of Cirque Us! to their training facility in Brattleboro, VT to get an inside look into what it’s like to prepare for a show and train.

What a treat!  I got to watch them practice and warm up; I also talked to the performers about what training was like.  It brings a whole new perspective to watching the show and brings my appreciation of the work they do (which I was already impressed with) up to a whole new level.

I learned so much and wished I could’ve stayed longer.

Here are some key take-aways I gained from the day.

You always have to be on Your Game

Cirque Us! performers train for two weeks from 9 am – 9 pm to get the show ready.  They have to be physically warmed up throughout the day. As Lindsey Barrows, who specializes in hand balancing, states the hardest part of training is being on your game the whole time: you have to fit the “schedule of your own body within the schedule of the rehearsal.”

This is why I saw them stretching at various times in their training.

You Have to Trust People You Don’t Know

Most of the Cirque Us! performers have their background in performing for the youth circus, Circus Smirkus, however, many have not worked together.

This means they have to learn to trust each other very quickly while performing tricks that put their safety at risk, like the three high I saw when I arrived.

You have to trust that your professional colleagues have the expertise and mental readiness to keep you safe while you’re standing on their shoulders or being catapulting into the air.

As I watched them perform the three high, which they had been practicing together for a few days, I would’ve never known they hadn’t worked together.  They were laughing, focused, and demonstrating a lot of teamwork. It was as if they had been working together for years based on what I saw. This says a lot about the caliber of professionalism and experience the performers have.

There’s Always Something New to Learn

Jesse Dryden, creative director, filled me in on the details about what it takes to be a circus performer.  He stated circus skills are progressive. Today you might learn how to juggle and tomorrow you’ll learn another trick.  It’s a discipline that constantly requires performers to recognize their limits and push past them to learn more. As Lindsey Barrows explained, not everyone has the same skill set so performers are being pushed to do tricks they’re not used to doing.  For example, they might put juggling into an acrobatic number. These performers already know how to bounce juggle, ring juggle, or perform a three high, but now they have to apply these skills in a new way artistically or with others. For example world recording holding juggler, Delaney Bayles, already is an expert at juggling but now she need to practice juggling while sitting in a chair. Another performer will need to practice bounce juggling using a chair as a prop.

As elite performers training means their working to refine their skill at the nuance level: “We’re building an elite machine,” Dryden explained. As I was watching them perform the three high, master coach of Circus Smirkus and hand balance expert, Sellam El ouahabi, stopped by to see his former students and took the time to give some feedback.  I heard instruction like “push with your hands” and “no jumping” as El ouahabi pointed and directed the performers on how to adjust their balance.

Dryden explained that the feedback was about balance and counter balance; the performers had to adjust their weight based on the other performer.

I learned you really had to be focused and in tune with what was going on.  Below the performers are practicing juggling on chairs.

It’s Hard Work is an Understatement

Each year Cirque Us! puts together a show from scratch in two weeks, including technical work and dress rehearsal.  They will work on a skill for about

15-20 min. each day until it’s perfected (like the three high).  So by then they may have practiced for over two hours on a skill that will only be 20 seconds of show time in front of an audience.

Imagine how much longer it would take if the performers had to learn a new skill from scratch as well?

You Have to Rely on Each Other and Stay Positive

The Cirque Us! crew create their own work environment, structuring out each day to get the most practice time.  While one group works on an acrobatic trick, others will work on their expert discipline.

Then they’ll practice a group juggling ensemble, and later move onto another circus trick.  It’s a long day and Ivan Jermyn, an expert in acrobatics, states it can be a challenge to stay positive and stay together mentally because you might encounter obstacles like being hungry, frustrated, or just needing alone time.

That’s why it’s important to accept the unique environment and work together to support each other, he said, which is what I saw during training. Performers would encourage each other with good job or clap after a successful trick.  Everyone was super focused and ready to help each other. Collaboration was ongoing: ‘what do you think about this…’ ‘I was thinking…’

Dryden and the Cirque Us crew may be creating an elite machine, but I think they’re also creating a little circus family too. 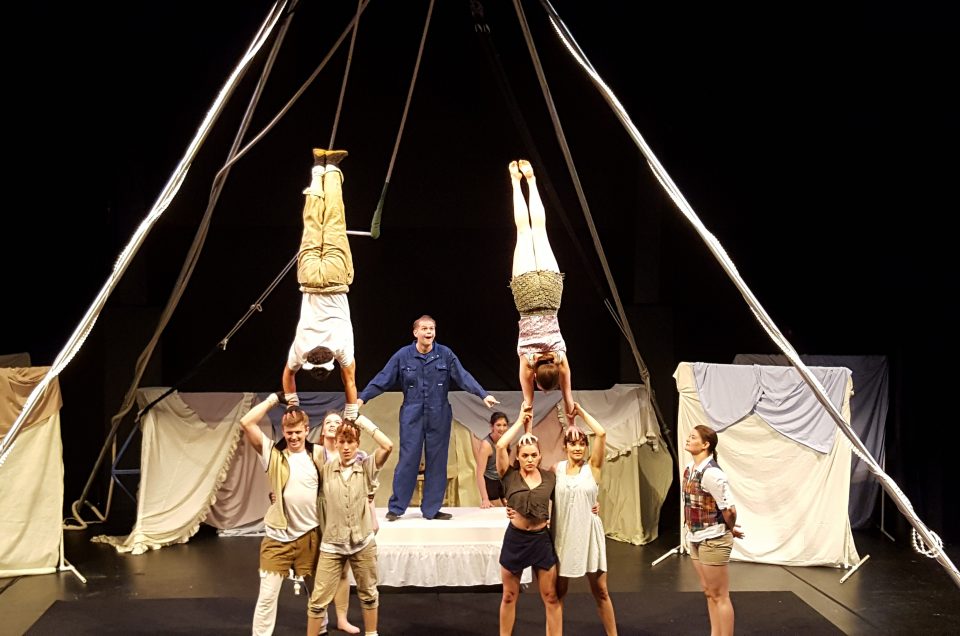 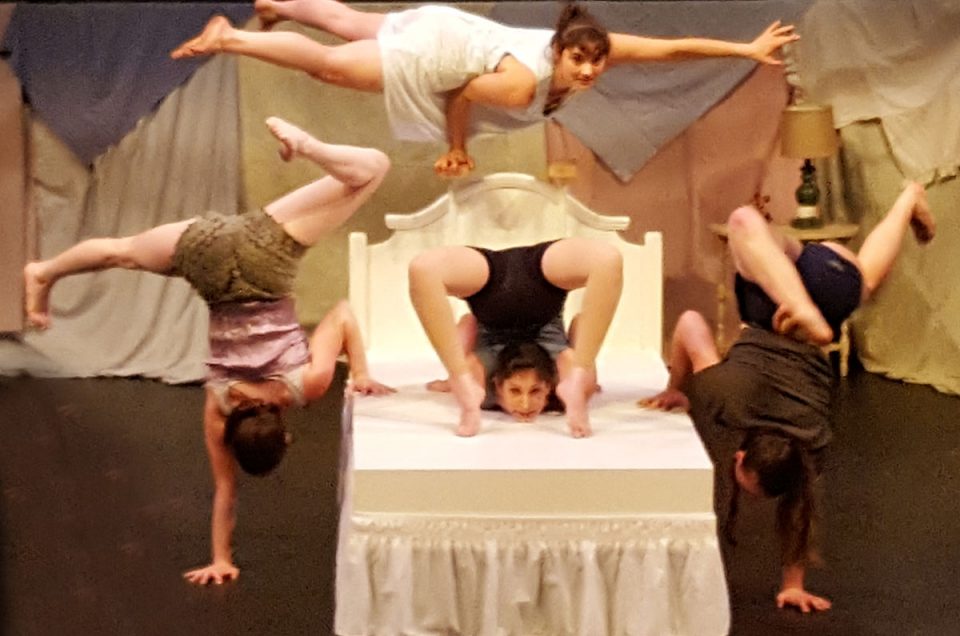 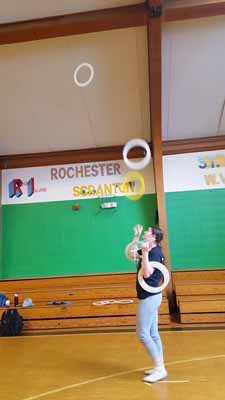