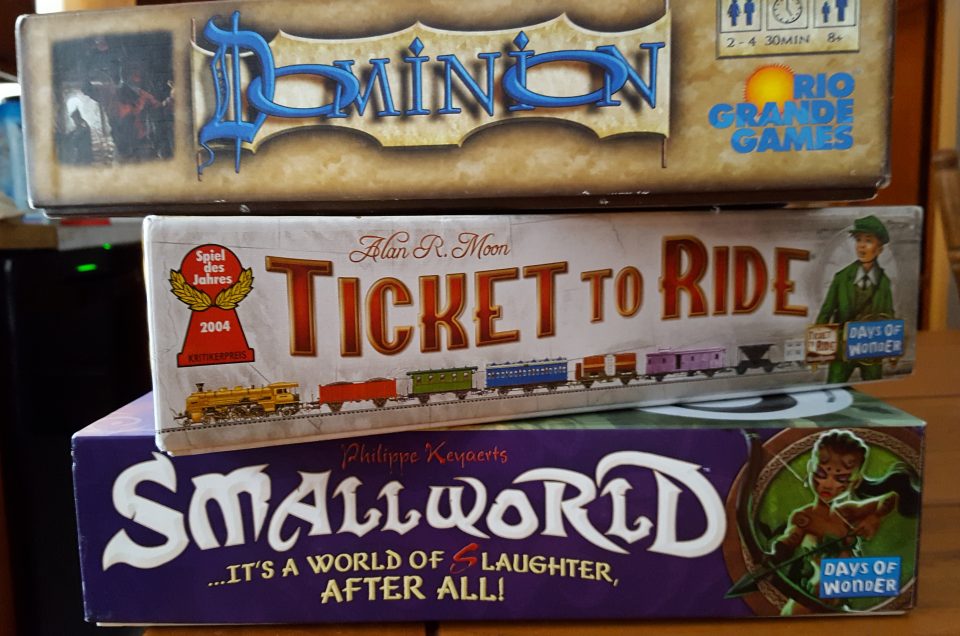 Below you’ll find an overview of games you can rent at Black Moon Games to get you started into the wonderful world of modern board games.  Black Moon Games is located on the lower level in the plaza next to the Fire Station where the Lebanon Village Store and Sunrise Buffet are.

Games have really evolved from Sorry and Monopoly where you progress around a board and whether you win or lose depends a lot on luck.  Now there’s tremendous variety in games but that can be overwhelming.  Plus games can be expensive so it’s hard to know what to pick.  I’ve bought a few games and found I really liked them but they weren’t my husband’s type of game.  So it’s really important to try games to know if they fit your gaming style (because not everyone likes all types of games like me).

The games below are top picks in the board gaming world because they have the following features:

(play in under an hour, most under 45 minutes)

to Learn and Pick Up (though watching an overview really helps!)

(each time you play the game feels different, not repetitive)

Game Elements:  has dice rolling, managing your hand, route building, and trading with others

You’ll Like it Because:  It’s a great mix of all that’s great about board games: a nice balance of strategy and luck.

This is the Monopoly of the board gaming world.  Just about everyone who’s into board gaming as a hobby has played this game.  It’s the game that started it all. It’s the top game recommended for people to try if they’re new to playing board games or want to try something other than Sorry, Life, or Monopoly, which rely a lot on luck. Your collect resources to build and then add points towards the final count at the end of the game.    I can’t wait to try this some time.

You’ll Like it because: It’s a light game with a cool train theme and you can practice your long term strategy. I’ve played this game and really enjoyed it.  It’s easy to learn; you collect cards to complete your route you get at the beginning of the game.  Of course people will sabotage your efforts and that’s part of the fun too. This is also a great game to play as a family.

You’ll Like it because: It’s easy to pick up and learn and is great for those who like card games.

See it Played/Explained:  Run through

Just like a regular card games has tremendous variety in play, so does Dominion.  The basic premise is that both players start with the same deck of cards and improve upon them as the game progresses to eventually have enough money to buy victory points.  I’ve rented this game and I’m going to try it this weekend. I love card games, so I’m sure this will be a winner for me!

See it Played/Explained: If you’d like to see an overview of how these three games are played, what they look like, and a mini-review, check out Starlit Citadel’sTop 10 Board Games.  I love this site for their easy to understand reviews on board games.  I always know right away after looking at their reviews if this is going to be a good game to try for my husband and I.

You’ll Like it because: You work together against the rules of the game.  Tons of replay value!

I’ve played this game multiple times and love it.  It’s a breath of fresh air for me because I can work with people and not against them.  I’m one of those people that says, ‘Wow, good play!’ when my husband gets 40 points in Scrabble.  There’s a lot of player interaction and it’s a quick game to play, so it’s not boring at all while you’re waiting your turn because you’re helping each other.

To play the game you set up tiles on the table in any order, which represent the island.  Then you ‘flood’ tiles to start the game. The object of the game is to make it off the island with the treasure before it floods by working together.  Each play has a certain role that allows them certain special abilities, so that’s a fun aspect of the game too. I highly recommend this game!

Good for: couples, small groups, weeknight fun, teens, and those who like sci-fi movies/books

You’ll Like it because: It’s an interesting theme: stop viruses from taking over the world and you work with other people to win the game.

Since I really liked Forbidden Island, I’m sure I’ll like pandemic. I like the sci-fi theme and would find navigating the map of the world a fun change for a board game set up.  Just like Forbidden Island, you work together to stop the viruses by taking actions and using your special abilities like building a research station, healing the sick, or finding a cure.  I can’t wait to try it sometime.

Good for: couples, families, teens, everyone!

You’ll Like it because: There’s a lot of variety to the game each time you play, cool creatures, and the strategy is fun

This is really fun to play!  You can be all sorts of characters like a skeleton or a troll.  I was a fish character called a Triton and a rat. It reminded me of a creative version of Risk.  We read the instructions, but the video run through really helped us understand the game and it was easy to pick up after that.  I think kids and teens would really enjoy the character aspect and abilities part of the game.

Good for:  if you’re short on time, take on the go, party game, families, couples, weeknight fun, small groups, everyone!

You’ll Like it because: It’s a light game with a cute pictures, easy to learn, and quick to play.

This game reminds me of Spoons but with sushi pictures.  In Spoons you have to get four of a kind and in Sushi Go you have to get the best combination of sushi dishes.  It seems like in both games cards go past and you have to decide to pick it up and discard or just pass it to the next person and it goes by fast. Definitely easy to pick up and play.  Plus it’s quick and has cute pictures.

Game Elements:  dice, pattern building, collecting sets in your hand, placing tiles to create the board as you play

Good for: couples, families with elementary aged children, everyone!

You’ll Like it because: It’s a light game with beautiful artwork and easy to learn

Grow bamboo to feed the panda, which was given as a peace offering gift between countries.   This game won many awards for being a great family board game and for its artwork. It’s a great family game because of the panda theme, fun pictures, and hands on activities like moving the panda, gardener, or growing bamboo.   There are a lot things you can do in a turn, which makes it have more strategy for adults, but the actions are simple so that works for kids.  There’s also has a board for kids to keep track of their actions. Definitely something to try!

This is a simple game about collecting cards and gems to win prestige and thereby points to win the game.  It won awards for best family game and board game of the year.   It looks fun to play and similar in concept to Dominion where you start with cheaper cards to buy more expensive cards that help you,  but the theme is more visually appealing and engaging, so I think I might like this card game even better.

Good for: good for small or larger groups, party game

You’ll Like it because: It’s different than a traditional game, builds on your creativity, and intriguing images

I played this game with a large group in pairs and had a lot of fun!   This reminds me of Balderdash or Apples to Apples but with pictures.  One person is the storyteller for the round and picks a card from his/her hand and describes it in general way.  Then everyone picks a picture card that they think represents the description. Everyone then decides out of all the cards which one was the one the storyteller chose.  Points are given if your card was chosen or the storyteller’s. This game has won numerous awards: best family game, best party game, and best board game of the year. If you want to try something different and love to tell stories or think on your feet, this is a great game for you.

Good for: couples, people who like chess, playing a game on the go while you’re waiting

You’ll Like it because: The pieces are good quality and beautiful to play with, no board to set up

I like chess but I’m not great at it.  This might be another game like that. Fun to play, but I’ll always lose.  That’s okay. If you like chess or want to learn a similar game with a fun insect theme, this is a game to check out.

Good for:  short on time, couples, families, party game, everyone!

You’ll Like it because:  Easy to understand, pretty pictures

This game has a unique premise: make sure your love letter gets to the princess before the other suitors’ letters do.  This game won multiple awards including best party game, family game, card game, and award in excellence for gaming winner.  After looking at the overview this game looks easy to play because the cards say what to do and the rounds go quickly, especially if you’re just playing with two players. If you’re the last player in the round, then your letter got to the princess.  The more letters you get to the princess the closer you are to winning the game.

You’ll Like it because: Easy to learn and set up, plus fun monsters!

This is like Yahtzee with fun monsters.  This is great for families because there’s a lot of randomness and luck so everyone has a fair shot at winning.  It would even be great to play with teens because it’s quick, interactive, and a mix of strategy and luck. This won best children’s game, best family game, and nominated for best party game.   Definitely one to try!

I hope you find a game that’s a new favorite.  Let us know what you think!