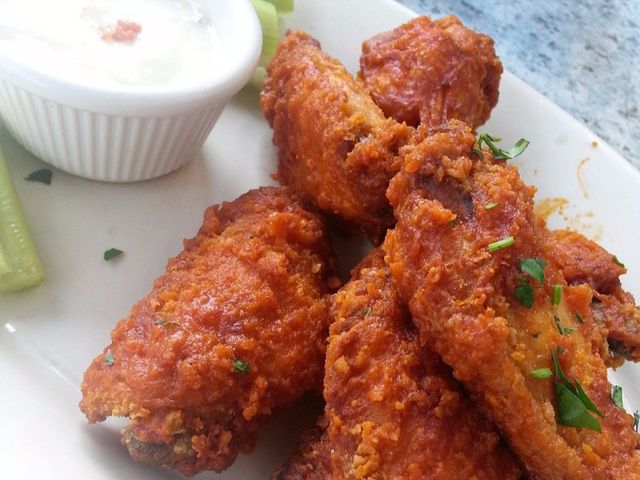 There are lots of places to get wings.  My husband’s ordered wings many times at Ramuntos, but where else can you get some wings? Here’s a list of establishments in the Lebanon area that sell wings and you can read reviews too. Some locals also specifically recommended these restaurants for you to try.

BigFatty’s BBQ in White River was recommended with comments like ‘mmmm’ and ‘hands down.’  That’s high praise! I’ll try the pulled chicken sandwich.

People really enjoy the Public House in Quechee for wings.  It was one girl’s favorite place for wings. One person said the sauces were ‘awesome.’ Maple burbon is a definitely one to try. Other comments were ‘amazing,’ and ‘delicious.’

Poor Thom’s Tavern is a secret gem in Meriden. People like their wings, especially the maple Sri Racha and BBQ.  The rest of their menu looks great too like risotto dumplings and marinara. Yum! One person on their Facebook even said their food was incredible.

Mike’s Store in Hartland has house smoked wings.  They fry them and toss them in the sauce of your choosing.  The teriyaki sounds good. If I liked blue cheese, the buffalo blue cheese sounds like a fun combination.  There are four other sauces to choose from, or just enjoy them plain. Check out their Facebook page for ideas on something to munch on or drink.  Their posts are really fun and engaging.

Murphy’s in Hanover serves wings and one reviewer said they were the ‘absolute best wings.’ Wow.

At Latham Tavern in Lyme whatever you have, sounds like you won’t be disappointed.  Try the wings.

CJ’s Tavern in Quechee is another local favorite.  The reviews on Facebook talk about how they have the best wings around.  Another place to try where I know I’ll get a great meal. Stop by their Facebook page and be entertained; I especially like their post about clapping your hands to live music is better than clicking a like button.

Time Out Grill in Claremont ranked #6 in all of New Hampshire for their wings by WMUR viewers.  They also won awards for the best burger joint and place for late night eats.  Congratulations! One reader said the wings are ‘done to perfection and the sauces are great.’

Colatina Exit is a pizzeria in Bradford, VT has great wings. You can get roasted garlic sauce or spicy buffalo sauce with their wings.

If you’re looking for some good beer deals to wash down your spicy wings, people recommended Salt Hill or Jesse’s for their happy hour and great beers. You can also try Wicked Awesome BBQ.

Where’s your favorite place to get wings?

Desserts to Try in the Upper Valley

Take-Out Places to Try in the Upper Valley